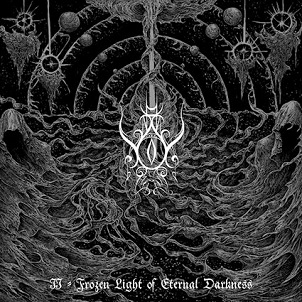 Obviously, it’s 2017 and Battle Dagorath’s fifth full-length II – Frozen Light of Eternal Darkness is being released this year. (Don’t be fooled by the album title.) But, it got us to thinking how the album would fare had it been released 20 years prior during black metal’s golden age. Think about it: Epic black metal was in long supply, led by Emperor. Symphonic black metal was starting to bubble thanks to Dimmu Borgir and even Cradle of Filth. Traditional, fundamentalist black metal was still held down, to a degree, by Darkthrone, Mayhem and Satyricon. It would have been the perfect climate for a band like Battle Dagoroth to succeed.

We say all of this because the band, comprised of multi-instrumental man Black Sorcerer Battle and keyboardist Vinterriket, sometimes let their ambition get in the way of results. They have created what amounts to one of the longest black metal LPs in recent memory, with a 79-minute run-time. And sure, we’ve often balked and complained about song and album length, but in this context, it’s understandable.

Showering the listener with a relentless wheel of classic black metal chord arrangements and lush keyboard patterns, Battle Dagorath are long-form black metal personified. Of course, that often leaves moments of intrigue swept off to the side, if only because you’re dealing with a cavalcade of other, longer ideas, but we’ll point to the somber takes of “Death ov Aeons” and the almost wistful instrumental “Supernal Realms” as album highlights.

Really, II – Frozen Light of Eternal Darkness is a beast. It’s not a chore to get through per se, but it’s time-pushing black metal to the most extreme degree. And had it been released 20 years, it would have been hailed as the most challenging black metal album of the era.