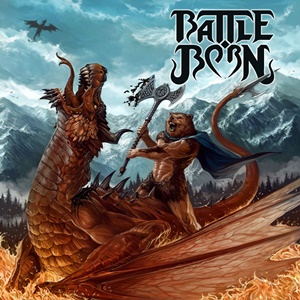 A UK power metal quintet, Battle Born on their self-titled debut EP aim to create powerful hymns of mighty steel. From the battle-laden illustration on their cover through the similar uniform imagery in their personal garb, it’s evident that we are dealing with a group of musicians that live for the European-style of uplifting melodies and equally convincing musical support. Adding the personal journey of strength, honor, and valiant warriors slaying in battle for lyrical concepts as well as narrative / sound effects that take you into that realm and its clear Battle Born possess conviction and passion for the style of songwriting and performances delivered.

The keyboard/guitar themes, double kick tempos, and upper register mid-range / falsetto vocal delivery speak of influences that start with Helloween and Hammerfall and then delve a bit deeper into current aspects of Battle Beast or Twilight Force. Triumphant choruses as well as positive/cultural-laden speed riffs from keyboardist/guitarist Will Kerr and guitarist Tom O’Dell pushes “Bring the Metal Back” into early highlight reel material, even if the measured phrasing can be a tad on the cheesy side. Marching strains and swords clashing signal the mid-tempo Accept/Sabaton-ish anthem crunch for “Man of War” – singer Jack Reynolds choosing to be a little restrained and calmer during the verses before ramping up the grace and power during the chorus. You’ll also get the tender, cinematic ballad “For Our Home” before ending the proceedings on another dramatic note with “Sovngarde Awaits”, the ivory notes and guitar textures diving a bit into Kamelot /medieval chord progressions while the solo breaks create more power charge moments.

At five songs in just under 25 minutes, Battle Born create a first outing that gets the power metal appetite fulfilled, and properly leaves the listeners wanting more. We all know plenty of people that love this style that takes them away from their daily struggles and strife – as a result, a band to keep tabs on as they have all the tools to ascend up the ranks of their influences.