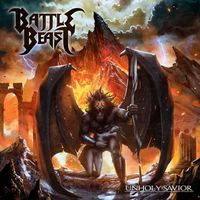 One thing that has often kept this scribe from fully embracing a number of power/traditional metal bands is the sheer level of goofiness and shtick present (yes, the irony is not lost that there is that there is just as much of the same in the extreme genres). But that’s why it came as such a surprise how much enjoyment has come from listening to Battle Beast’s third album, Unholy Savior.

Battle Beast embrace all of the trappings of power/traditional metal and roll with the punches. The over-the-top keys present on tracks like the fantasy-driven instrumental “Hero’s Quest” or undeniably infectious ‘80s throwback “Touch in the Night” work because they are genuine and grounded by excellent songwriting. They are also balanced by heavier numbers such as “Madness” and “Speed and Danger” that prove the band has the chops to run with the best in the genre. It’s hard to listen to this and not have a smile on your face, particularly with upbeat numbers like “I Want the World…And Everything in It” and the aforementioned “Touch in the Night.”

Vocalist Noora Louhimo’s vocal performance is really what rounds things out though. With a massive range, she proves herself capable of pulling off anthemic numbers like “Far Far Away” and “Lionheart” with powerful screams and soaring charismatic choruses, yet able to subdue things with restrained elegance on other tracks such as “The Black Swordsman” and “Sea of Dreams.” Her versatility and ability to push her vocals to the limit really give Battle Beast an edge.

To quote editor David E. Gehlke’s review of previous album Battle Beast, “is it wrong to like this?” After an infinite number of spins with Unholy Savior, the answer is a certain no. Is it full of heavy metal clichés and some (un)intentional goofiness? Absolutely! But it’s such a fun album to crank at full volume that it doesn’t even matter. Battle Beast are thoroughly comfortable in their own skin and know exactly who they are at this point. Come join in the fun!