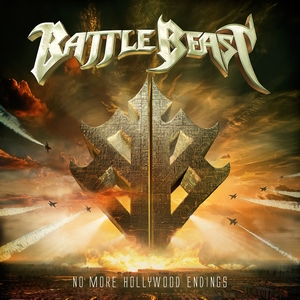 With the success of Bringer of Pain and the previous split with former songwriter/guitarist Anton Kabanen firmly in the rearview, Battle Beast have been riding high for the past two years. Some significant touring between now and then (with some high profile ones in North America no less) has also helped to boost their spotlight, effectively pushing the band to the next level. With more eyes drawn towards the band, they’ve risen to the challenge with No More Hollywood Endings with some pleasantly surprising results.

Given that the band has always embraced an energetic and ‘larger than life’ presence in their tracks, it’s very clear they wanted to step things up in a few varied directions. Looking across the songs, there’s more variety than on their previous releases, and the ‘more is more’ idea definitely applies. As such, the heavy parts are heavier, the pop influences are stronger (much to the chagrin of some), and most importantly the fun factor weighs in significantly. The ‘raise your fist’ anthems like “Piece of Me,” “The Golden Horde,” and “Unbroken” take all of the elements that have worked for Battle Beast and gives them an added shot of adrenaline and bombast. Powerful synths, wild guitar solos, and some brash attitude (particularly in “Piece of Me”) make for some joyous romps with a devilish combination of classic heavy metal and ‘80s indulgences. Other more pop structured mid-tempo rockers like “Eden,” “The Hero,” and “World on Fire” hit just the right balance between earworm hooks and uplifting crunch. There are a few ballad-esque tracks as well, with vocalist Noora Louhimo really delivering some standout moments, such as the poignant “I Wish” and “Bent and Broken.” But “Endless Summer” stands out here, with a sound that feels like an ‘80s radio rock hit with Battle Beast flair.

An album that is simply loaded from start to finish with glorious hooks, over the top heavy metal and pop flair, and soaring vocals, No More Hollywood Endings is Battle Beast at their finest. They’ve embraced what works best for them, and that is the element of catchiness and fun. There’s not a single track here that wouldn’t shine in the live setting, or benefit from cranking the volume when heading off on a road trip. Practically guaranteed to make you grin when listening to it.