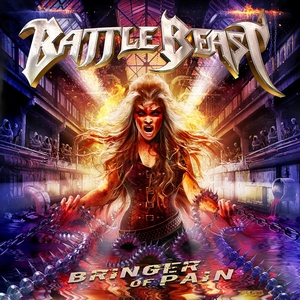 What makes Bringer of Pain strongest is that the band fully embraces the assets that set them apart and blow them up effectively. The big ‘80s synths that always served as a strong point with previous releases (see “Touch in the Night”) truly soar on tracks like the bouncy “Dancing with the Beast” (which goes so far to include a rousing solo) and anthemic “Beyond the Burning Skies.” It’s fun, and they pull it off without making the end result too cheesy in nature. Hooks galore as well, with a combination of metal aggression and pop sensibility encompassing tracks like “Familiar Hell” and “We Will Fight” on the melodic end, whereas the Judas Priest-esque title track ups the intensity into fist-pumping fury, coupling nicely with the more epic “Lost in Wars,” which has guest vocals by Amorphis’ Tomi Joutsen. The final weapon of Battle Beast is vocalist Noora Louhimo, with a range that can handle everything from the heavier (“Straight to the Heart”) to the poppier (“Bastard Son of Odin”) with equal aplomb, even pulling off the closing ballad, “Far from Heaven,” with genuine emotion and strength.