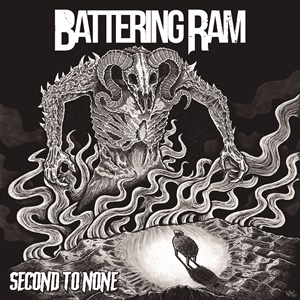 Small town wonders often become workhorses in the arts and entertainment industry – relishing the opportunity to deliver stronger output due to an underdog mentality status. Forming in 2017 in a mining town Filipstad up in the northern woods of Sweden, Battering Ram stand for an older 70’s/80’s influence base across the early hard rock/metal landscape for this second album Second to None. Using the advances of modern recording technology, these nine songs possess that balance between aggression, grit, and undeniable catchiness.

Locking into a series of mid-tempo riffs and hard charging groove section work with the right highlight reel embellishment in terms of the specific melodies, fills, or circular guitar breaks that contain uplifting harmony enhancement, people will be hard pressed not to wave fists or cheer to the tracks “What I’ve Become” or “Down” upon first (or fiftieth) playback. Bassist Joakim ‘Jocke’ Ståhl and drummer Tony Trust make for a unified, energetic team on the bottom end – laying down some serious Judas Priest-like stomp for “Hold On” and the highway ready “Rage” that combines the feel of their 80’s era with Painkiller. The menacing delivery of singer Johan Hallström has this dual impassioned plea meets larger than life presence that crosses the hard rock/metal landscape – but most will consider his twisted melodies throughout “Too Late” or “Coming Home” akin to Volbeat or Mustasch. The record closes with “Battering Ram” – its old western/bluesy field contains acoustic strains, distant vocal effects, and a darker ballad to crushing anthem atmosphere, the lyrics outlining the band’s love for performing and the power of their music. Unlike most bands who use throwback influences, the production and tones for Second to None rival what you can expect from bands of the current generation – thick, crunchy, and lively all around.

Amidst all the genre bending and multiple twists that hard rock and metal has to offer, Battering Ram prove that pure, basic three-chord driven material still contains value and relevance in the current landscape.