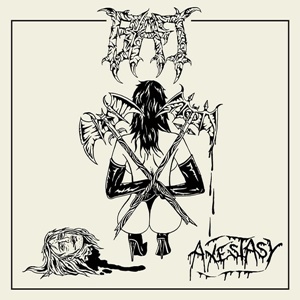 The speed/heavy metal act Bat issue material when they can squeeze time and energy together – two-thirds of the lineup in bassist/vocalist Ryan Waste plus guitarist Nick Poulos active with Municipal Waste while drummer Felix Griffin pounds the skins now in M.O.D. among others. Since their start in 2013, they’ve issued a demo, 7” single, Motörhead cover, and a full-length, as their new EP Axestasy comes out after an almost three-year break between recordings. Never fear, earthdogs and river rats – Bat continue to churn out street level metal that slices and dices in that old school manner which causes mass hysteria at festivals like Frost and Fire and Keep It True.

It’s clear early and throughout these six tracks that thrilling riffs, hypnotic bass underpinning and a steady supply of snare, kick, hi-hat action with the flashy fills are the main course Bat dish up. Much like stateside mavens Night Demon, the influences aren’t difficult to pick out – a little early Metallica here for “Wild Fever”, a dash of epic Iron Maiden pacing for “Ice” there. It’s done with such reverence, affinity and charm that you can’t dispute the three-piece in their acumen for the genre and execution to the hilt. The right guitar accent, the meaty/gritty vocal delivery from Ryan, the drop on a dime transition to promote crowd engagement for “Long Live the Lewd” where ‘your soul is screwed’ – it’s all in there and more. The songs whirl by in quick hitting fashion – before you know it, it’s over in less than 14 minutes, begging for an instant return engagement (or two). “Ritual Fool” opens with an evil a cappella intro delving into “In the Beginning” / Shout of the Devil days from Mötley Crüe, before the crossover punk/metal vibes and Ryan’s fervent, low end plus rougher around the edge delivery vocally (think a clearer King Fowley) takes command.

Crack open that six-pack, don the leather or denim jacket, and grab Axestasy to elevate your metal desires and succumb to the lifestyle that Bat embraces. 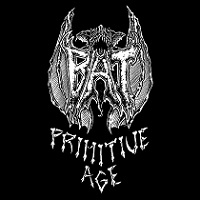