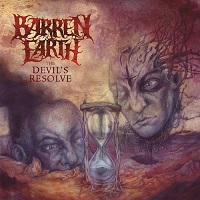 Gaining a huge buzz in the underground for the sextet’s previous work in groups like Amorphis, Moonsorrow, Swallow The Sun, and Kreator among others, this Finnish progressive death metal act return for their second full-length album The Devil’s Resolve. Fortunate enough to expose myself right from the critical start with their 2009 Our Twilight EP, one can easily be drawn to the multiple clean, atmospheric and growling vocal approaches and the equally expansive musical

sounds, drawing from a multitude of doom, pagan, progressive rock, and death genres.

Keyboardist Kasper Martenson throws down some 70’s Jon Lord organ parts against pagan rhythms and dual clean mystical vocals and death roars on my first highlight “The Rains Begin” and then ramps up the proceedings with some classic Dennis DeYoung inspiration during the chorus and solo section of “As it is Written.” Fret not all guitar

aficionados as Sami Yli-Sirnio and Janne Perttila showcase a number of distinct and colorful riff and harmonic moments, almost as if transporting the best in American and UK progressive rock to fuel Barren Earth’s heavier, underground orientation motives, especially on the exotic, fluid “Oriental Pyre.”

There’s something very Pink Floyd-meets-Nektar-like about Mikko Kotamaki’s softer, tranquil clean melodies, and it’s a wonder he doesn’t destroy his larynx with some of his acidic underwater bellows from opener “Passage of the Crimson Shadows” or the medieval marching macabre mood throughout “Vintage Warlords.” Overall, the seasoning on the road both in Europe and on the Finnish Metal Tour 2 with Ensiferum and Finntroll improves the band’s attention to maintaining memorable hooks amidst the winding riffs, tempo changes, and nuances in roller coaster emotional atmosphere.

With Opeth charting their own 70’s laden path on Heritage to mixed reception, I believe Barren Earth can scoop up a wide throng of their castoffs who desire a metal foundation amongst the progressive, creative think tank. Scandinavia rules again.