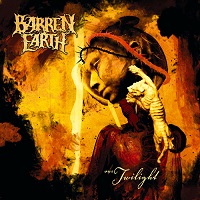 Seriously…keep this vintage Sentenced/Amorphis stuff coming. We can’t get enough here. With members of Kreator, Swallow the Sun, Moonsorrow and an ex-Amorphis dude in its ranks, Barren Earth recreates the vauntedTales/Amok sound, with a little late 90’s progressive twist. It’s all well and good – not Insomnium good – but good enough.

Obviously a teaser for the band’s forthcoming 2010 full length, which one would think would further exploit what’s being attempted here, Our Twilight isn’t quite fully realized. However, there’s a nice cross-section of flowing riffs (mid-90’s Amorphis), progg-y keyboards (late 90’s Amorphis), ethereal guitar solos (Opeth, all eras) and good Finn/bad Finn vocals. It results in some joyous moments, specifically the chorus of “Our Twilight,” guest vocal inclusion from Dan Swano (Edge of Sanity, Bloodbath) on “The Flame of Serenity” and treacherous verse section of “Floodred.”

There’s a risk when doing recreation metal as such, just reference the numerous throwback death metal bands (Chaosbreed, Death Breath, Murder Squad, etc.) that have flamed out. Yet there’s a lot of wiggle-room and forgiveness with the Finnish melodic death metal sound and if someone is going to figure it out and do it right, it’s these guys. Looking forward to the full-length.