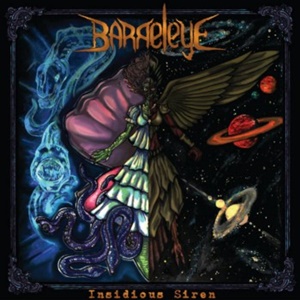 Originally together from 2012-14 as Barreleyes, they decided to become singular versus plural as Barreleye – since putting out an EP and full-length before this latest Insidious Siren EP. Lineup changes delayed the release of this effort, as latest vocalist David Nelband entered in 2017 – probably aiding the refinement of these four compositions for this German unit. After a few spins it’s obvious the quintet embraces a musical stew of groove metal, where metalcore, thrash, technical, and death elements all stream together depending on the atmosphere and mechanics of the arrangement on hand.

Slightly disjointed riffing against a mid-range raspy roar and low-tuned guitar/bass action makes “Cosmic Downfall” a perfect opener, while the follow up tracks consist of the title cut in a three-part series to make things more challenging and adventurous. “Overcome” as part 1 seems to be the more technical and progressive effort, the beginning instrumental sequence featuring a lot of push and pull chemistry between the guitars, bass, and drumming – while David’s melodies rear back into Lamb of God/Pantera land against some bluesy Corrosion of Conformity actions. The riffing tandem of Christoph Witte and Danilo Garbe lob serious addictive crunch and slamming sections to the mix – the type of mechanized stomp that can bring everything from like Grip Inc. to Crowbar and Machine Head to mind. Barreleye keep the focus on big hooks and obvious grooves while occasionally mixing up the varied dynamics between odd-shaped chord sequence transitions, distanced vocal effects, or surprising blast-beat maneuvers – which extends their appeal beyond many contemporaries who settle for the lowest common denominator in execution. By the time the crushing “…Long Live the Tyrant” third part finale concludes through its melodic death/gallop groove see-saw action, most listeners will be wishing there was more than 21 minutes of material to consume – but that could be a good thing in the long run as this current lineup gets more seasoning and live show action under their belts.

Insidious Siren proves another document in taking American groove/thrash influences, adding in a spice of melodic death/European sophistication, and putting out something brilliant, aggressive, and face melting.