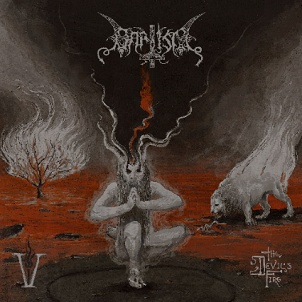 Somewhat of a hidden gem in Finnish black metal lore, Baptism, or rather, sole proprietor Lord Sargofagian, have been towing BM hard line since 1998. While fanfare has eluded Baptism, there remains an inherent depth and identity to the band’s catalog, something the spot-on folks at Season of Mist no doubt released upon signing the band for the release of V: The Devil’s Fire, which is obviously, their fifth album.

Melodic black metal is the name of the game here, although when thinking of melodic black metal in a Finnish context, the names Catamenia and Evemaster come to mind. (Evemaster was once far more BM than they are now.) The two regularly employ heightened, firebrand, speedpicking to get their point across, albeit to the point of excess in Catamenia’s case. Baptism, though, is all about restraint and song craft. Mr. Sargofagian carefully plucks and places his melodic ideas down with obvious thought, thus enabling early album gems like “The Sacrament of Blood and Ash” and “Devil’s Fire” to become memorable. And without the typical bells and whistles to enhance (or detract) from the songs, the formality and inherent quality of toppling cuts like “Malignant Shadows” and the excellent “Buried With Him” make Baptism an easy band to like.

In what has become quite the outstanding year for Season of Mist (see: Abbath, Destroyer 666, Sylvaine, et al), V: The Devil’s Fire may emerge as one of the label’s most unsung releases of 2016. Make no mistake about it – this is fundamental black metal to the core, unwavering, majestic, and alluring. But, the effortless nature in which these songs work their way through the black abyss warrants deeper investigation into Baptism’s productive past, and now doubt should quadruple their fanbase, at the least.