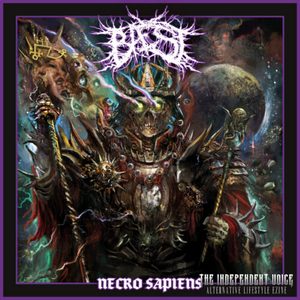 Continuing to roll forward, Necro Sapiens is the third full-length effort from Baest in just four years. When it comes to old school sounding death metal, sometimes this sort of thing can begin to reek of overkill, but thankfully Baest are not willing to fall into that particular pitfall. They continue ahead with pounding heaviness, and just enough hooks, guiding the way.

Baest’s sound has that classic death metal quality, but it’s thankfully hard to nail down one specific point of origin. There’s some clear nods to bands like Morbid Angel and Bolt Thrower, as well as some Swedish stuff mixed in as well, which adds a nice variety of spice to the punchbowl. Sure, some of the execution is pretty textbook for the most part, but the mix of overall aggression and melody is where Baest shines. Some tracks, such as “Genesis,” feed off of the rumbling mid-tempo grooves and do their best to inject a melodic aspect to it that is filled with hooks. Some accelerations in speed do the track well, and bring up the intensity a notch while giving some groove the attention it deserves. Other tracks hit the speed as hard as they can, such as the frantic “Meathook Massacre,” but they don’t drop the subtle melodies either, working well to blend in some hooks even at the more raging tempos and playing with the dynamics as the tracks progress. All in all, the tracks manage to keep things interesting as it progresses – the band never suffers from things sounding too repetitive.

Aggressive and evil sounding while still managing to land a number of grooves and hooks, Baest have an excellent formula that should please death metal fans. Rooted in the past, but with a production that brings it to the present, Necro Sapiens is an enjoyable taste of all things extreme.