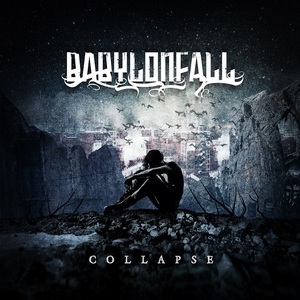 The first full-length from this Finnish act, Collapse hits right in the melodic death metal sweet spot. Babylonfall have an understanding about what the genre is all about and have poured it into this debut release. While Collapse does go through the melodeath checklist quite a bit, it’s hard to really knock it in the way that it does so.

One thing that does help Babylonfall in their debut is how they manage to capture a bit of heaviness. For a new melodic death metal band, you aren’t going to find the more typical commercial aspects to it. In fact, opener “Murder of Crows” starts off with much thunder under it’s belt with a combination of pounding grooves and pleasantly low growls. There’s actual intensity to it, even if the mid-tempo riffs still feel quite catchy in tone. Swirling melodies later on help give it some added flair and sets the band off in the right direction. As the album progresses, the same level of grit maintains itself, but the band also introduces a more directly melodic side. You guessed it – clean vocals in the softer segments. It’s not up the Soilwork/In Flames route per say, as they tend to fall into the more Finnish, melancholic (read: gothic) feeling rather than a poppy one. It makes for some more contrast between the sections (starting with “Awakening”), and gives the band something more to work with rather than sticking only with the heavy guns. It’s all handled pretty well, with the only slight negative being that the patterns start to become a bit predictable, and as mentioned before, feel like they are checking off the melodic death metal boxes as the album moves closer to its lengthy 55-minute runtime. But with that said, it’s all about the musicianship and style, and Babylonfall has those covered really well. You’ll find plenty of thrilling riffs and potent melodies across the tracks that should engage die-hard melodeath fans.

As a debut, Collapse introduces the band and shows some potential for Babylonfall in the future. As they continue to evolve, the shedding of some of the formulas and influences should grant them some added strength and make them a band to watch if you enjoy this style of metal.