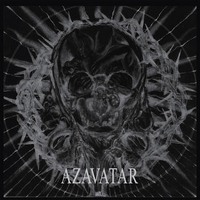 Brooding, precise, depressive and sinister black metal touched with well-placed atmospherics is the sort of music that newcomers Azavatar offer unto the world on their debut effort, the self-titled Azavatar. Though recently forged as a band, these members have been kicking around the Munich, Germany scene for a bit. Certainly no teeth cutting or ropes to learn on this outing, these four seasoned musicians get out of the gate in well-executed form, sounding dynamic and well put-together.

One has to wonder if there is an inside joke that the audience may not be privy to, in the naming of the five tracks that comprise the fifty-two minute album. We fans of black metal are well acquainted with the silly trope of “kvlt”, unfortunately now a part of the lexicon. Perhaps track one’s having been named that very cliché is a touch of irony, a dig against the (ahem) system? Perhaps not too, but these Germans carry on the alliteration across the board, with all tracks (correctly spelled with a “C”), subverted into a more dubious form, and spelled with the ever-evil, letter “K”.

Moving on, said leadoff song “KVLT” shows that the band has a drummer to be reckoned with, and a focused sound featuring complex rhythms underneath hellish vocals and tremolo guitars which pick out some snaking and twisted melodies in sinister fashion. A melding of Deathspell Omega and modern-day Mayhem can approximate the sound. Certainly a pretty good start, but it’s really once we get to the second track “KAOS” when the band reveals a bit more and shows where they can slide into their own space. The chorus of “KAOS” finds the guitars picking out the more ethereal melodies over the maelstrom of the rest, creating a darkly melodic angle, in a manner not entirely unlike what is found on Blut Aus Nord releases.

An upward-trajectory of quality seems to unroll in a listen to Azavatar, each song gaining more of a hold as we go along. As we approach the middle, personal favorite “KVRSE” emerges as a definite highlight for this album. It’s one of those songs that makes you say to yourself “wait, who is this band?”. Good stuff.

The quality moves forward, perhaps more in a bell-curve than an incline, but hey – that’s one guy’s opinion. Azavatar creates some pretty captivating vibes in their more melodic and atmospheric facets, those which I hope return in spades on the follow-up. But for now, let’s congratulate the band on a job well done. Very solid, and a recommended listen.