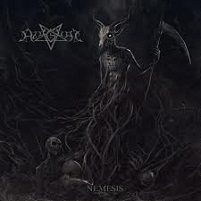 Finland’s Azaghal have been around for quite some time and it’s almost a surprise that Nemesis is already their ninth full-length effort. Rocking a splendid vintage Scandinavian black metal sound as always, Nemesis is arguably the best sounding album of the band’s career. It’s still rough and raw around the edges like proper black metal is supposed to be where the production retains the instruments’ bite, but the release is packaged with a final mix that is clean enough to make things pleasantly audible.

With music more along the lines of Dissection and Immortal (sans the meticulousness/beauty of the former and atmosphere/venom of the latter), Azaghal know how to write quality black metal. The album explodes out of the speakers with the vicious “In Deathlike Silence” and pummels the listener for the next four songs

with a lethal mix of blistering speed and crushing slowness. Though they are solid, the songs are pretty straightforward BM with a few wrinkles. However, Azaghal liven up the unholy festivities a bit with some musical dexterity and kick things into the stratosphere with album highlight “Black Legions of Satan.”

Azaghal add some color to the pallet with “The Pit of Shoggoths” where clean male vocals rise from the fires and wonderful melody oozes from the dense fog. Album closer “Satanic Devotion” is a mesmerizing cacophony of emotion and flattening heaviness, a song

that would be the keystone for the album had it not been for “Black Legions of Satan.”

There isn’t really much to gripe about regarding Nemesis aside from its lack of sheer originality. Though there are several quality songs on the record, it’s not like Azaghal has reinvented the wheel (or themselves, for that matter). Still, any fan of the aforementioned bands

in this review or just vintage black metal with actual songs should waste little time and seek this one out.