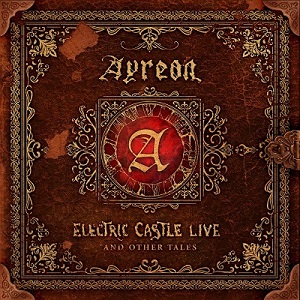 The dying medium that is the live album is being kept alive by one man: Ayreon’s Arjen Anthony Lucassen. Already a sort of mini-legend within progressive rock and metal circles for his ambitious albums that are proverbial cattle calls for vocalists, Lucassen is now onto his second live album release in a row with Electric Castle Live and Other Tales. (2018 saw the release of the career-spanning Ayreon Universe – Best of Ayreon Live.) Recorded over four nights at Tilburg’s 013, Lucassen and his brigade celebrated the 20th anniversary of 1998’s Into the Electric Castle (A Space Opera) by bringing down the proverbial house in comfortable quarters.

The list of guests is far and wide, with usual Ayreon holdovers Anneke van Giersbergen (ex-The Gathering), Marcela Bovio (ex-Stream of Passion), George Oosthoek (Mayan) and Damian Wilson (Threshold) lending their considerable talents, not to mention Epica duo Simone Simons and Mark Jansen, as well as a guest spot from legendary former Marillion frontman Fish. The Dutch crowd, as expected, is in full rapture, applauding each time a new song begins and the assortment of characters enter the stage. Of particular note — and this shouldn’t be a surprise — is van Giersbergen, who routinely shines throughout the set.

Into Electric Castle is probably not Lucassen’s best work — he wouldn’t hit his creative stride with Ayreon until The Universal Migrator double-album, but, the whole thing here is flawless and expertly-recorded, which shows just how well live albums can be executed. Hence, this is probably why Lucassen continues to release them — few can do them better.