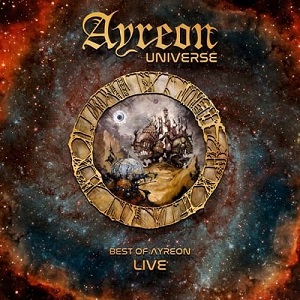 Lanky and creative without end, Ayreon mastermind Arjen Lucassen has long faced the logistical conundrum of assembling all of the various guest singers to complete an album, leaving the idea of performing live out of the question. To further muddle things, Lucassen suffers from stage fright. But, the man’s ambition (or courage) should never be called into question after pulling together a three-night event with 16 guest singers, 11 musicians performing 28 songs, eventually coming to life by way of Ayreon Universe – Best of Ayreon Live.

All sorts of formats for this thing, namely 3LP + MP3, 3LP + MP3 (Limited Colored Vinyl), 2CD, 5-disc Earbook, plus 2DVD and Blu-ray. (We received the 2CD stream, which this review is based on.) The spectacle, for lack of a better term, sounds ultra-professional and crisp, with the notable guest singers adding their (pun intended) voice to the proceedings, namely the likes of Anneke van Giersbergen (ex-The Gathering) and Sharon den Adel (Within Temptation), while power metal favorites Tommy Karevik (Kamelot) and Hansi Kürsch (Blind Guardian) get in on the action on “Everybody Dies” along with Nightwish siren Floor Jansen. Also of note is Threshold’s Damien Wilson on “And the Druids Turned to Stone,” showing the man’s rather soft versatility. (Let’s not forget about Katatonia’s Jonas Renkse showing up to perform on “Comatose” along with van Giersbergen, either.)

Lucassen eventually joins in on two songs, “The Castle Hall” and “Amazing Flight in Space,” thanking the audience for their support and in the process, somehow overcoming his fear of the stage. Ayreon Universe, of course, is far more than we can describe here — a massive undertaking that probably cannot be outdone, even by Lucassen’s own lofty standards.