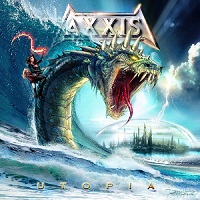 A two decade-long career plus a recent opening jaunt with two premiere power acts across Europe (the late 2007/ early 2008 extravaganza with Gamma Ray and Helloween) means very little to a fickle North American audience who haven’t seen many Axxis albums hit this side of our shores.Utopia, the 11th studio recording of the quintet’s career, focuses on their spot-on power guitar

The band carry an equal presence in the keyboard and guitar departments, as Harry Oellers isn’t merely background fodder on the ivory-led material such as “Fass Mich En” (German for “Making Me” ) or “Father’s Eyes” which intersperse actual note and chord phrasing along with more sweeping orchestral harmonics. It appears to me the fire of touring with seasoned veterans influenced Axxis to intersperse a little bit of swing and fun into the tempos, most notably “The Monsters Crawl” and “For You I Will Die” where drummer Alex Landenburg gets a chance to throw down subtle triplet rolls against the normal mid-tempo arrangements.

Where Utopia may be a make-or-break proposition lies solely in the helium-infused tone of vocalist Bernhard WeiB. To say the man sounds like a middle ages bard with his private parts caught in a vice would be an understatement. I’m sure within the first 10 seconds of the title cut you’ll either think he’s the most unique power singer

in the current crop or you’ll feel like smashing the disc against the nearest hard surface at your disposal.

I think there’s enough of a market for this sugar-infused melodic power metal that Axxis can start making inroads within markets long thought lost for popularity.