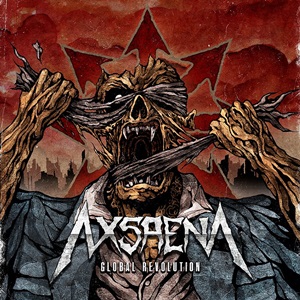 Taking a cue from his college toponymy (geographical place names) class for a band moniker, Zoltán Petres formed Axsaena in 2012 as a two-piece outfit, tackling all instrumentation while adding Chris Violence for vocals. Global Revolution is their second EP in five years, a four song outing that in under 15 minutes traverses a fine line between groovy heavy metal and melodic thrash with progressive death nuances.

Zoltán possesses an above average skill set when it comes to guitar playing and fluid bass abilities for certain – while Sam Austin’s guest lead work within “Me Against the World” rivaling the best breaks of James Murphy-era Death and Obituary, as well as others in that neoclassical trained mindset. Certain verses will provoke possibly laughter because of the juvenile rhyme scheme tricks that match up to the riff proceedings – a particular favorite in “Any Last Words” being ‘Death by committee/without any pity/isn’t it pretty?’ Opener “Gospel of Violence” serves up the best entertaining sequence of the EP, as around 1:31-2:09 the exotic, progressive chord sequences conjure up a lot of early Maiden meets melodic death textures. Vocalist Chris Violence has a gritty sneer that straddles groove and thrash lines, probably most representative of a primitive John Bush if looking for a reference point, while Zoltán flexes a little more of his aggressive side on the faster, death-oriented closer “Burn It to the Ground”.

It’s all fairly straightforward in terms of sonic push and execution – but Axsaena aren’t really grabbing for the brass ring in terms of originality or even exciting main hooks that you really want to go back to again and again. Could they benefit from a proper drummer to elevate the energy away from programming? Possibly… but in the end, it’s all down to whether this will remain a studio-only endeavor or transform into a live entity. Zoltán really should dig deeper in terms of quality control for Axsaena to blossom from the underground, as the abilities are there for certain.