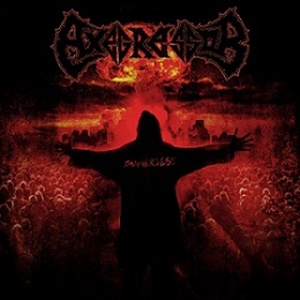 Content to drink your beers while unleashing the thrash beast from within, Axegressor have been parading their wares since 2006, releasing an EP and three previous full-lengths, including Last from 2014 on Listenable Records. It’s been four years since that ‘last’ (pun intended) effort, and armed with a new label Brutal Records we get to hear the fourth full-length Bannerless – which could be synonymous for the progressive, forward-thinking direction these eleven songs take, as there aren’t many musicians these days willing to add a little Voivod and Coroner left of center nuances to the solid thrash mechanics on display.

The Voivod influence appears in a couple of forms – the choice of oddly shaped chord progressions that become spacious during “Terminal Ignition” and opener “In Safe Space No One Can Hear You Scream”, as well as the raspy, frantic screams of vocalist Johnny Nuclear Winter. Because the band chooses to be more outer limits in terms of pacing and phrasing, you won’t get much in the way of straightforward pounding riffs and uppity rhythm section work – it can be shapeshifting and alluring, such as the maniacal rapid-fire “Human Travesty” or the bass propelled “Peace At Last (Armaggedon)” where the drum motions feel like Rush careening against Pestilence in certain time signature marching passages. For all the progressive impulse Axegressor live for, there is the occasional return to a heads-down, street-level anthem – and that’s what you’ll get for “Don’t Be An Asshole”, paying homage to early Motörhead and possibly 80’s metal through some of the basic riffs and shout-a-long melodies.

It’s rare to hear a band willing to take Teutonic-style Kreator/Destruction-ish thrash and put in those progressive influences – and that’s why Axegressor will probably be an outlier in the scene. In the long run, Bannerless will gain favor for those cult-fringe people who tire of carbon copy Exodus/Testament wannabees – and this scribe believes there are plenty of those consumers all over the globe. 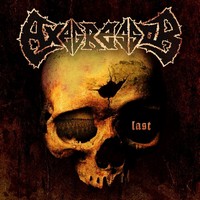