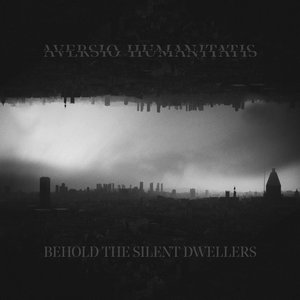 An inverted city, a set of song titles that resonate equally as boss names, and a suffocating, black metal-meets-Nero di Marte sound. This is Behold The Silent Dwellers and it is indeed a new DLC for Dark Souls III.

Notable (and patently false) as that last statement is, Behold The Silent Dwellers does indeed mine the same open bleakness that populates and colours the sparse worlds of the Dark Souls series. Aversio Humanitatis’ work here will likely find welcome to listeners versed in the last fifteen years of Deathspell Omega, the Icelandic scene since 2010, or geographically even closer to home, the recent output of Gaerea with Limbo. At times gnarled, at times cutting, Behold The Silent Dwellers is a stark exploration.

With those sonic markers for orientation given, the subsequent listening experience may not be surprising for most listeners. “The Presence in the Mist” oscillates between open clean passages, pulsating double bass passages, and passages of escalating, blastbeat foundations for the sandblasting to strip the listener clean. It is a well-worn trifurcated structure that is well executed, if not particularly novel here in 2020.

Elsewhere the familiar is similarly well done: “The Wanderer of Abstract Paths” is a brash wall of sound, perhaps much akin to its title, embodying the spirit of someone standing off against the tempest while the band works out the tension. The back half of the song here is where the band carries the most explicit familiarity with Nero di Marte – and the progression on offer is just as awesome in this context.

While coming in at a lean 36 minutes in 6 tracks, there is not much separating the songs from one another – the songs are all structured in similar ways and all hit around the 6 minute mark. While that may be an intentional ode to the endless urban environments the band is drawing some degree of inspiration from, it is also indicative of the genre tropes the band is working with. Post-flavored atmospheres are quite amorphous by design, it requires considerable effort on the part of a band to render it in distinct terms.

That is not to say that Behold The Silent Dwellers is an unpleasant listen – far from it. But it is distinctly a mood listen, a mood listen very much tailored to a particular type of audience. Fortunately for all parties involved, yours truly is center in that demographic. For others, however, mileage will vary tremendously. Fortunately for all of us, while closer “The Scribe of Dust” does go hard and end the album in a satisfying manner, there is no Soul of Cinder to be found.