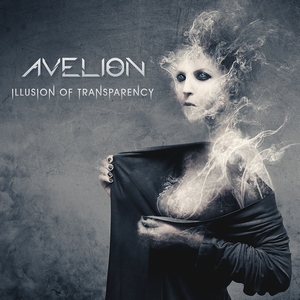 Without question, there’s been more electronic, futuristic, and dare we say, dance-y influences making their way into the modern metal quadrant. While some are hesitant to embrace those bands that dive in at full-speed (Amaranthe, Sonic Syndicate, Dead by April), it hasn’t stopped other fresh acts from coming up with a more mild, and thus a more “metallic” and balanced approach. Italy’s Avelion sets up a sound that has the bounce of modern metal, but at a level that more of the dyed-in-the-wool types will still appreciate.

Steeped in as much progressive structure as it is in electronics and modern influence, Illusion of Transparency is an intriguing release. While some songs may lean in one direction more than the other, the unifying factor of Avelion’s sound is that they keep a melodic power metal vibe that is instantly catchy but provides a depth that comes out more with repeated listens. The urgent melodies of “Burst Inside” (one of the album’s strongest cuts) and the heavier grooves of “Waste My Time” represent these two sides of the album, with the former firing off hyper-melodic keys and electronics atop galloping progressive melodies and a saccharine chorus while the latter embraces a slower tempo that pulsates some electronic touches but firmly plants itself in a guitar-forward direction and pleasantly dark touches. Some of the electronics may recall Machinae Supremacy in execution (see “Falling Down”) but Avelion don’t really dabble in chiptone per say. But the power/progressive framework fits the electronic elements well, and one never really overshadows the other in a single track. In other words, the progressive solos and catchy riffs never play second-fiddle to the keys/electronics.

A degree of balance is what’s given on Illusion of Transparency. The power/progressive community should be able to get behind the melodies and musicianship at hand, while the modern elements give them a more fresh perspective without getting in the way. A fine debut, which should mark Avelion well for future releases.