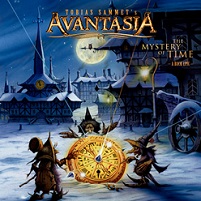 Tobias Sammet must have been pursuing his Blind Guardian collection when scouting cover ideas for The Mystery of Time. Doesn’t that look like something BG would have done circa 1992? We’ll spare the endless connections between the Guardians and Sammet (i.e. Edguy) for another day, for Sammet’s stature is starting to rival that of not only BG, but several other top-rung European metal bands. Dude is a workaholic, no doubt about it, and the creative playground that Avantasia has become for the man simply rolls on, with The Mystery of Time peeling back on some of the unnecessary pomp of the 2010 double album run.

With the usual array of guests (Biff Byford, Joe Lynn Turner, Michael Kiske, Eric Martin from Mr. Big (?), etc.), Sammet manages to integrate each seamlessly into the album’s flow. It’s not like he whips up a song, parts the ocean and drops in a guest – there’s some rather crafty placement here, specifically on “The Watchmaker’s Dream,” which is right up the alley of Turner’s Rainbow work. Byford handles the orchestrated “Black Orchid” with ease, while Kiske gets his kicks on the speedy “Where Clock Hands Freeze.”

The ballad “Sleepwalking” falls a bit flat (much like most of Sammet’s ballads, unfortunately), but the real surprise comes in the form of “Invoke the Machine,” which features Pretty Maids vocalist Ronny Atkins. Atkins, who has long been an underrated entity in these circles, becomes the perfect offset to Sammet’s vocal curdle, working in tandem with a nifty and tricky main riff, thus emerging as the album’s highlight cut.

For a project that routinely comes close to being too big for its britches, Sammet’s songwriting acumen keeps Avantasia grounded. The Mystery of Time could have gone over the top (and surely there are those who would like to see such a thing happen), but it doesn’t. How Sammet stays so productive…now that’s a mystery.