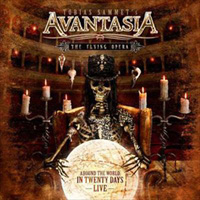 Now the main focus of pint-sized dynamo Tobias Sammet (also of Edguy), Avantasia are getting the live album treatment by way of The Flying Opera. Recorded during various portions of the band’s 2008 tour, The Flying Opera is a 17-song effort with an admirable take on a band essentially built for the studio.

Because Avantasia has used too many guest singers to mention here, Sammet had to pull from those who were available. Somehow Jorn Lande (Masterplan, Ark) is always free, but Michael Kiske (ex-Helloween) wasn’t, but that’s not of concern given that Sammett can hit Kiske’s notes anyway. Lande does his best David Coverdale during “The Scarecrow” and “Serpents In Paradise,” while ex-Angra frontman Andre Matos gets in on the act during “Reach Out For the Light,” although Sammet totally out-sings him.

The song selection focuses primarily on 2008’s The Scarecrow (obviously), so stellar jams like lead single “Lost In Space” and the ballad “The Story Ain’t Over” are thrown into the mix. Power metal-happy songs such as “No Return” are fun, and so is “Shelter From the Rain,” which is aided by some hilarious in-between song banter from Sammett who does his best to inspire a rather laid-back crowd. Rounding out the set is “Avantasia” (the band’s best song, by the way), “Promised Land” and “The Toy Master.”

Per the usual, live albums tend to teeter on the border of missing the mark altogether, and considering what a massive undertaking an Avantasia studio album is, it’s a total credit to the parties involved for pulling this off. Sammet is never out of ideas (a new Edguy is right around the corner, by the way), so The Flying Opera should help the band bide some time while Sammet is crisscrossing the globe playing “Lavatory Love Machine.”