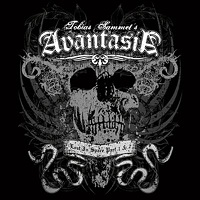 2008 was a breakout year for Tobias Sammet’s Avantasia project, perhaps forcing the Edguy frontman to put more of an onus on something was considered nothing more than an outlet for Sammet’s extra curricular Edguy activities. The success of The Scarecrow and its “Lost In Space” singles have put Sammet in a whole new tax bracket (or not) and with plans for another full-length by the end of ’09, now is the time to strike while the proverbial iron is hot, hence the combination to put the two “Lost In Space” singles together on one album.

“Lost In Space” aims well outside the power metal spectrum, and succeeds, in spite of its trite lyrical approach, although it can be said the same slant worked for “Carry Me Over,” another charting single off The Scarecrow.

Lots of covers here, including the dance-oriented “Lay All Your Love On Me” (ABBA) and “Dancing With Tears In My Eyes” (Ultravox), the latter of which is oddly enjoyable, as well as “Ride the Sky” (with drummer Eric Singer

on vocals) from Lucifer’s Friend and “In My Defense” from Queen singer Freddie Mercury.

Of the b-sides, “Another Angel Down” is a stirring number, heavy on chorus histrionics, although it can’t called a b-side since it appeared on The Scarecrow. “Scary

Eyes” is traditional power metal fare that is sorta ho-hum, while “The Story Ain’t Over” emerges as one of the more over-dramatic songs in the Avantasia pantheon, complete with a huffy, rousing chorus. Good stuff, actually.

Kudos to Nuclear Blast (and Sammet) for putting the two single releases together, making this yet another wise purchase still brave

enough to actually purchase physical music. This might be the last power metal-tinged release from Avantasia for a while, or ever, so eat up that Ultravox cover while you can (‘tis awesome) and re-visit The Scarecrow too.