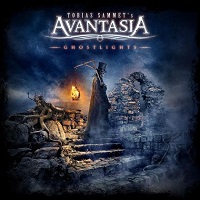 All aboard! Tobias Sammet has once again launched his symphonic metal rock opera known as Avantasia and you definitely don’t want to miss the journey that is in store for you on Ghostlights, the project’s seventh studio album and latest opus. Whisking you away on a magical trip that will surely grab hold of your imagination, you will find it hard to return from, as the melodies and choruses will be dancing through your mind long after the ride is over.

Originally known as the goofy front man of German power metal maniacs Edguy, Sammet has broadened his musical horizons over the years as the ring leader and mastermind behind Avantasia, a project that has more in common with the Trans-Siberian Orchestra or Arjen Lucassen’s Ayreon. Always assembling a cast of colorful yet talented characters comprised of special guest musicians and vocalists from throughout the realms of rock and metal for each album, Ghostlights is no different as Sammet welcomes back old friends such as Jorn Lande (JORN, ex-Masterplan), Michael Kiske (Unisonic, ex-Helloween), Bob Catley (Magnum), Sharon Den Adel (Within Temptation), and Ronnie Atkins (Pretty Maids), while introducing new ones to the fold, with Dee Snider (Twisted Sister), Geoff Tate (Operation: Mindcrime, ex-Queensryche), Marco Hietala (Nightwish), and Robert Mason (Warrant).

There hasn’t been much change with the core backing band. Sascha Paeth handles rhythm guitar and shares lead with Oliver Hartmann and Bruce Kulick (ex-KISS, ex-Meat Loaf). Michael Rodenberg is once again responsible for orchestration and keyboards, with additional contributions from Sammet and Paeth, and Edguy drummer Felix Bohnke anchors things behind the kit. Bass duties are split between Sammet and Paeth.

Like Nightwish main songwriter and composer Tuomas Holopainen, Sammet has an ear for melody and an ability to pen a memorable composition. The 12 songs on Ghostlights are chock full of infectious, lush melodies, catchy sing-along choruses, upbeat tempos, and heavy riffs. Whether going for the throat with a speedy number like “Babylon Vampyres,” featuring a harmonizing triple-guitar attack not unlike modern day Iron Maiden, or dialing things back and letting the ominous tones of the haunting duet between Sammet and Den Adel on the ballad-like “Isle of Evermore” creep into your psyche, these are well-crafted songs filled with emotion that will not only move you, but take you away.

“Mystery of a Blood Red Rose,” a mid-paced rocker that gets things off to a peppy start, featuring bright melodies, bouncing rhythms and a catchy chorus, sounds like it would have fit comfortably on Meatloaf’s Bat Out of Hell. Clocking in at 12:10, “Let the Storm Descend Upon You” is the longest song on the album and features Lande, Atkins and Mason alongside Sammet for a rollicking epic that begins with a beautiful keyboard melody and features sturdy riffs as the tempo picks up, anchored by steady bass and drums throughout. About halfway through, the instruments lay back, allowing the vocalists to soak up the spotlight before ramping back up for a strong finish.

Vocal talent is clearly spread across the album, but the standout performance may be from Herbie Langhans, whose hearty baritone perfectly fits the gothic atmosphere of the Type O Negative-like “Draconian Love,” which boasts another incredibly catchy chorus. When Langhans sings, “tell me how should I embrace, like roses we’ll wither on the vine,” it’s utterly chill-inducing. Honestly, there isn’t a misstep on the album. Even Tate, who some may question if he still has the pipes, shines in his performance on “Seduction of Decay,” which sounds very much like Kamelot, with echoes of classic Queensryche in places.

From fast up-tempo balls of energy like the title track, to slower, darker themed gothic atmospheres, haunting ballads, and bombastic, riff-driven epics, Ghostlights has it all while retaining that signature Avantasia sound, yet not being afraid to inject new ideas. You would do well to pick this up when it hits stores on Jan. 29, as it showcases Sammet at his most adventurous and ambitious.