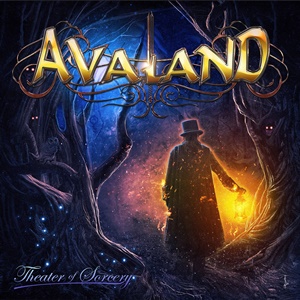 Considering the inspirational work of artists like Avantasia and Ayeron gaining critical and commercial acclaim, it’s not surprising to find younger musicians wanting to create their own take on the epic/power/symphonic metal and rock opera landscape. Avaland is the creative force of Adrien G. Gzagg, a 22- year-old musician from France – inspired by heroic fantasy, history and mythologies to create an eight- character story, Theater of Sorcery. The first album in a saga about a young sorcerer named Adam Wilstorm, seeking to bring light back to the kingdom of Avaland, controlling his powers that are connected with the storm.

Outside of the main five-piece of musicians (Adrien handling main vocals, keyboards, and orchestration beyond his composing duties), there are additional guest spots on the vocal and guitar front – much like his mentors who add the right color and versatility to flesh out the dynamic concept. Exotic tinges make the driving 8:28 “Gypsum Flower” an early standout, featuring the work of Zaher Zorgati (Myrath), Emmanuelson (Rising Steel), and Ralf Scheepers (Primal Fear) as well as spirited lead work from Stephan Forté (Adagio), a roller coaster effort featuring Symphony X-like movements against some Rainbow/Sabbath-like twists. The compositions run all across the power/symphonic metal spectrum – some possessing more of a catchy/commercial Helloween-vibe like “Storyteller” (guest singer Zak Stevens giving a solid steel performance) or theatrical and dramatic in the lush layers of keyboards against melodic guitar foundations for “Déjà-Vu”. All eight ‘voices’ appear on the closing effort “Rise from the Ashes” – not an easy task in a shorter 5:40 timeframe, but the driving tempo, playful guitar/keyboard lines allow the singers to glide and dance against the arrangement – coming together in a grandiose choir supported by high speed double kick propulsion. Kudos to the main musicians who tackle this material with virtuoso spirit and impressive versatility – the rhythm section of bassist Camille Souffron and drummer Léo Mouchonay very adept at all angles of epic, power, and symphonic metal interplay.

Overall Avaland executes more of a power metal opera with symphonic support when necessary – keeping Theater of Sorcery moving along at a good pace even with its hour-plus run time. When you surround yourselves with the right professional support, the results should be above average – and that’s the case here, even if the influences are quite pronounced. We will see how the story unfolds over the next Avaland record and beyond.