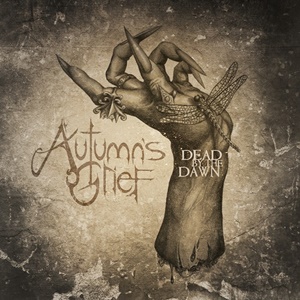 Finnish act Autumn’s Grief have quickly established credibility as a trio together since arriving on the scene in 2021 – releasing this second album Dead by the Dawn while signing with Inverse Records. Self-described as a ‘sibling’ or ‘natural follower’ from last year’s independent debut The Dead Don’t Smile, there’s a natural synthesis of gothic, rock, and doom influences amidst the solid symphonic/melodic metal platform present throughout these ten songs. It’s an intoxicating mixture that keeps the proceedings alluring and magical, tugging at all the conflict emotionally that makes this material catchy as well as memorable.

It can be as simple as a repetitive vocal refrain that goes in circular motion during the conclusion of “The Sea of Apathy” – or the calmer clean guitar/bass interplay for the main verse work on the follow-up “Under the Belt of Orion” – that equally sends shivers while digging its earworms inside your body instantly. The mournful, calm vocal delivery emanating out of Noora Virtanen traverses a multitude of genres – incorporating rock, doom, gothic, and new age textures as a dramatic, cinematic ballad like “Hanging in Midair” illustrates. When these musicians wish to amp up the energy and intensity, you get those metallic/progressive push and pull moments where guitarist/bassist Santtu Rosén and keyboardist Ville Skön go for broke, then take a left field turn to express the moodiness present track to track. Commercial aspirations prop up from time to time, be it modern keyboard nuances against a potent groove during “They Talk to Me”, or the Paradise Lost meets HIM-oriented gothic rock/metal swirl against a heavenly set of verse/chorus melodies for “The Tide”. At 40 minutes, Autumn’s Grief sit in that sweet spot of delivering competent, diverse songs without overstaying their welcome – perfect for those vinyl lovers as well.

Artists like Tristania, the much-appreciated Left Hand Solution, Anathema as well as the already mentioned Paradise Lost and HIM appear to be influences in the approach, execution, and performances present for Dead by the Dawn. The blending of genres serves the needs of Autumn’s Grief well, their Finnish heritage plays a part in that deeper, melancholic appeal. Curious to hear more from this three-piece, as they’ve established a great sound two albums deep into their brief career.