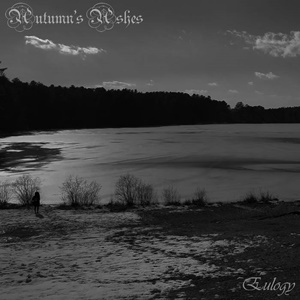 Today musicians can easily develop multiple outlets to express their creative visions – if given enough time, energy, and ability to execute those ideas. Case in point – Autumn’s Ashes from Rhode Island. The main duo behind this group consists of Rick Lowell and Dan Saillant, musicians with experience in various doom, gothic, melodic death, and black acts such as Sorrowseed, Blacksoul Seraphim, and Annihilus Mundi. Their debut EP Eulogy contains five tracks that traverse the lands of gothic/death and doom pastures which will probably harken back to the days of 90’s/2000’s era acts such as Amorphis, Swallow the Sun, Paradise Lost, and even spots of Type O Negative or early Katatonia.

Dan handles multiple instruments as the rhythm guitarist, bassist, and keyboardist – drawing upon lush instrumentation and pacing to set up anticipation even in the slower, crawling paces for the nine-minute plus “Reason” epic as the funeral-like keyboard segments and circular, doom runs will make many think of Messiah-era Candlemass. A whispered narrative promotes a cinematic, horror-like texture to the start of “Shutter”, the closing, almost eleven-minute epic that starts in a calmer fashion before the clean/growl contrasts promote more of a darker, almost blackened edge against the gothic/doom riffs – guest vocalist Haydee Irizarry (Aversed/Carnivora) adding some serene clean melodies during the back half of the arrangement. It’s easy to get caught up in the swirling sway of the songwriting – even the two shorter instrumentals “Down the Road” and “Up the Stream” ideal for enveloping the listener and preparing them for the next, vocal-driven track.

Rick as a drummer has great versatility and understanding of how to maintain momentum and interest even at mid-tempo to resting heartbeat paces, not easily achieved in the gothic/doom realm. The inconsistency when it comes to his vocals could be a see saw battle for total approval though – he has a gritty growl and lower register ability in his clean delivery that works much better than when he tries to push himself above mid-range. Aspects of Nick Holmes or Fernando Ribeiro of Moonspell come in, but there’s a bit of an off key warble that hits during the chorus of “Vanished” or the verses within “Reason” where you feel the strain- hopefully something in the future that can be improved upon through some vocal training/coaching. Add in guest guitar solos from others like Seven Spires’ Jack Kosto and The Fateful Hour’s/Marrowfields’ Brandon Green and this again illustrates the depth of talent across the New England metal scene.

Potential is present – Eulogy paying homage to many European gothic/doom/death acts that developed this sonic blend 15-20 years previous. Let’s hope the clean vocals are a bit stronger to match the enticing music next time around.