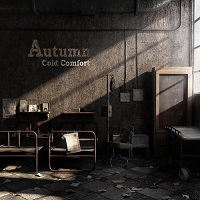 Best known for their regular piggy-backing off everything The Gathering has ever done, the Netherlands’ Autumn are making subtle, and very gradual strides toward individually on their fifth album, Cold Comfort. While it’s hardly the sunny, joyous romp that 2007’s most-excellent My New Time was,Cold Comfort basically foregoes any type of stylistic panache in favor of well-composed, simple hard rock.

The second album with singer

Marjan Welman, Cold Comfort sounds far more self-assured than its predecessor, Altitude. A lot of this has to do with Welman’s soft-to-the-touch vocal wingspan, something she uses to her advantage on the caressing title track and “Alloy.” Occasionally, she’ll peak her head out from her uh, “comfort” zone (no pun intended, promise) on the bouncy “Black Stars In A Blue Sky,” which is the clear-cut pick of the litter.

Over the course of the album, the band finds itself volleying between the gentle soft rock template laid down by songs

like “End of Sorrow,” and “Truth Be Told (Exhale)” and the more up-tempo and rock-oriented “Retrospect” and “Naeon.” Autumn doesn’t do one better than the other, yet there’s always some type of hook to latch onto with these songs, most notably on the chorus for “Retrospect,” another jam where Welman emerges as the showcase.

About as meat and potatoes of a female-fronted rock band

functioning in the metal world as we’re going to get, Autumn’s impressive songwriting skills are ultimately what make Cold Comfort an album worth taking note. If nothing else, it’s a nice reprieve from the shallow, buxom beauties we’ve come so accustomed to seeing and suffering through…