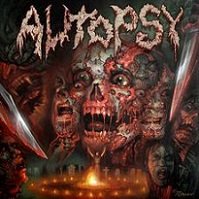 The second album back from a post-reformation act is definitely the hardest. Without the buzz and/or excitement that predicted the initial comeback platter, veteran bands that actually do make it to this album must approach their material with a little more care than before. What worked the first time back, doesn’t always work the second time, just ask Judas Priest. California death metal legends Autopsy, though, are a smart bunch, fully aware of their legacy and standing as one of the forerunners of gory death metal, which helps them ease into the Headless Ritual, the follow-up to their 2011 comeback Macabre Eternal.

Wisely not rehashing the close-to-the-vest Macabre Eternal, Autopsy makes some plays for an extension of their core death metal sound. Progressive this is not (for being progressive in this style of death metal would be sacrilege), but the riff pattern stretching done by Eric Cutler and Danny Coralles is impressive, namely on the doom-tinged “Slaughter at Beast House” and excellent “She Is a Funeral.” There’s a notable horror-feel to these riffs; like you’re strapped to a chair, forced to watch a B-movie with ridiculous props. Yet at the same time, there’s no lack of engagement found in the punk-frayed “When Hammer Meets Bone,” a track worthy of those fabled Mental Funeral days.

Based on today’s climate where bands following in Autopsy’s footsteps is more than just happenstance, one can’t help but get a throttle out of Chris Reifert’s maggot-filled vocals, and those unseemly riff patterns. They’re both unique to Autopsy; no amount of wannabee newcomers can take that away, and ultimately, it makes The Headless Ritual a success.