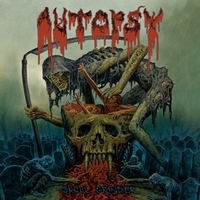 Often the subject of many influence lines and “sounds like” areas for much of the current crop of death metal bands trying to imitate that putrid and rotten sound that made them famous, Autopsy really doesn’t need much of an introduction. All of their work, post-reunion, has held up over time, and it’s pretty easy to expect what you are in for with each new round.

With the band approaching 30 years at this point, it’s pretty understandable that the content of Skull Grinder is pretty predictable to what they’ve accomplished to this point. That dirty, grimy sound that they first struck gold with way back in the day still remains the thing they do best. No band can really pull it off with the same efficiency. The other part is Chris Reifert’s crazed vocals. Without a doubt a recognizable feature of the band compared to the usual ‘death metal growl,’ he still does it quite animated over the course of Skull Grinder. In terms of the tracks themselves, opener “Strung Up and Gutted” is a rough and violent introduction – sheer adrenaline from start to finish. The oher tracks take a more calculated approach, moving between the faster aggression and slow, gritty and grimy (somewhat doomy) riffs that ooze with musical acid (“The Withering Death”). “Sanity Bleeds” does score some points though for going a bit more in the atmospheric direction with some neat guitarwork underneath.

You know what you are going to be getting with an Autopsy release. They’ve more than paid their dues, and if you are a fan, you’ll undoubtedly gobble this one up just as quick as any of their post-reunion material. If you aren’t big on Autopsy’s sound, Skull Grinder isn’t going to convince otherwise.