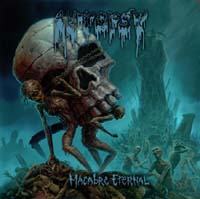 With their career effectively built off their classic Severed Survival debut from 1989, it can’t be easy being Autopsy. Purists will lambaste the band for trying to mooch of their legacy; long-time fans will forever clamor for new material, ready for the band to fail, with this year’s Macabre Eternal being the first all-new Autopsy album since 1995’s poorly-received Shitfun. A “comeback” album is a lose-lose proposition for the band, but frankly, it’s hard to not get behind Macabre Eternal.

Making the smart move to gradually update their production values, Macabre Eternal still has the loose and organic feel of the band’s early efforts. However, there’s even greater pop and cackle to the proceedings, something that’s evident as album opener “Hand of Darkness” comes bursting out of the speakers. Vocalist/drummer Chris Reifert still has one of the more animated and maniacal belches in death metal, providing songs like the doomy “Deliver Me From Sanity” and “Bridge of Bones” that necessary old-school feel.

In fact, there’s plenty of old-school touchstones here, for Autopsy has faithfully recreated their classic sound in the guitar department. The brooding and dark riff movements heard on “Dirty Gore Whore,” “Seeds of the Doomed” and punishing “Bludgeoned Brain” (love the bass break) are right out of the death metal circa late 80’s playbook.

Autopsy’s simplistic, horror-based death metal formula has been replicated more times than anyone can count, but there’s something awfully authentic hearing it come from the originators. In terms of a comeback, Macabre Eternal is spot-on, even mildly remarkable. This should satiate the skeptics and pad the band’s cult fanbase. If it doesn’t, then the underground is in a lot worse shape than when Autopsy left it in 1996.