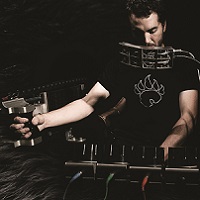 Words don’t do Author & Punisher proper justice, only because this is a one-man project where machines, yes machines make the music

, not regular instruments (and yes, we realize that a vast majority of modern day recordings are not exactly “human”). The creation of Tristan Shore, Author & Punisher is akin to industrial acts like Skinny Puppy and Front Line Assembly, only with a different pulse and angle. Invariably, Shore’s fourth offering Ursus Americanusis unlike anything else going right now.

By the use of hands and mouth, Shore is able to make his machinery and vast speaker setup (see video below) make aural carnage. His set-up consists of several hand-made steel and aluminum parts, that when operated, make sound. Through the power of innovation (methinks Shore is really good at math), he’s able to make distorted sounds that when sequenced properly, coalesce intosong

. And there are some interesting, sludgy dungeon-sounding songs here, like “Lonely,” and the lengthy “Set Flames,” which would be right up the alley for a creepy horror flick…or a smut film. Gross-a-roo.

Ursus Americanus scored high based on originality alone; the whole “man versus machine” thing has long been a regular topic in metal and to see and hear it first-hand, is pretty cool. Granted, this won’t suit everyone (there’s not a scant trace of melody and Shore barely sings

), but it’s the kind of thing that has incredible potential to take off once it gets more attention. Let’s hope that it does… 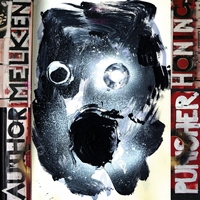