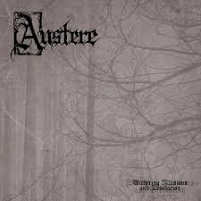 Whether people would admit it or not, one of the fun things about black metal comes in its sense of mystery, exclusivity, secrecy and rarity.  It can be like a secret treasure that only a chosen few have the capacity to enjoy.  As with any non-mainstream cultish passion there is a sense of an “us against the world” mentality and when one finds that dark little corner in which to hang ones hat (or neck, for that matter) there is a sense of belonging, no matter (or perhaps especially) if in the dark little corner hangs a noose.

Withering Illusions and Desolation is the 2007 debut album from now-defunct Australian depressive/suicidal black metal band Austere.  Originally released on limited cassettes, and now remastered by Eisenwald Records, it will be released on CD and digital formats.  As with depressive black metal, the music is characterized by dissonance and stark emotion.  Melodic and melancholy, this music is raw, sad, angry, painful and haunted.  The tormented shrieking of a suicidal lunatic over slow yet nifty drumming and moping guitar swells might be a way to put it.  It’s absolutely an acquired taste that’s dark and cathartic – and you know, I like it.

The issue with this album is that it sounds awful.  To be sure, there is a wealth of underground black metal in the world that sounds like shit, sonically, and much of it on purpose – which is in line with the general ethos of the music, actually.  This album, though, sounds defective.  While the left channel contains all of the drums, vocals and most of the guitars, the right carries a small amount of guitar and frequently cuts in and out, which is extremely annoying.  So, not only does the mix really suck, it’s hard to ignore the problems with the right channel.  If this is remastered, they either did a poor job or the original tape is somehow even worse.  Given this, Withering Illusions and Desolation, though a good album, should only appeal to collectors and fans of the genre.  Ignoring this, I’d call it a 7.5.