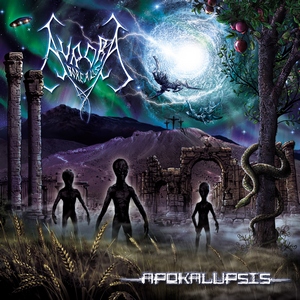 When prepping to listen to the latest album (their seventh overall) from Aurora Borealis, it’s important to strap yourself in before hitting the play button. The band has always been about putting the pedal to the floor and not letting to, no matter the cost, and Apokalupsis continues to play to that same strength that the band knows exactly how to exploit at this stage of the game.

Full-throttle blackened death metal is the obvious starting point for anyone unfamiliar with the perpetual underdog act. Their last album, World Shapers, was some of their strongest material to date, and Apokalupsis simply continues to churn out more of the same. But when it comes to this type of material, Aurora Borealis sit at the head of their class (alongside blast-friendly acts like Angelcorpse or Krisiun). The songs all but knock you backwards with their frantic velocity and intricate riffing that straddles the black/death line with ease and efficiency. Like their previous album, this is another sci-fi intensive concept story, though many will be drawn just due to the sheer chaos of it all. Melodies below the surface also still reign supreme – the main reason that listening to Aurora Borealis doesn’t draw the same level of tedium that many similar bands do. Despite the constant high-tempos, it’s more catchy than it has any right to be (see “Sarkikos” if you want a quick example) at no expense to the music. For something so undeniably drenched in extremity, there’s still something that you can bite into and enjoy on the melodic side of things.

Aurora Borealis continue to impress with their level of extremity and memorability therein. Speed freaks can enjoy the frenetic rush, but also enjoy the melodic creativity below the surface. Simply put, this is Aurora Borealis doing what they have always done, at a level that many peers simply can’t match.