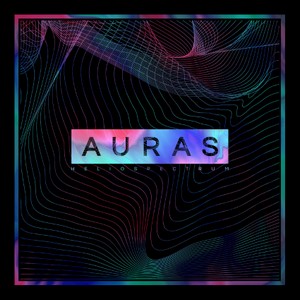 When it comes to the djent-y side of the progressive metal spectrum, there seems to be a movement of bands that have gradually softened their sound while trying to keep it “metal” (labelmates The Contortionist comes to mind). But this hasn’t appeared to hit the Canadian border yet, as Auras’ Heliospectrum still moves forward with heaviness intact, even despite some tweaks to the band’s overall sound.

The first few tracks of Heliospectrum bring the heavy grooves often and effectively. Sure, we are all familiar with the Meshuggah-esque grooves that many have adopted, but there’s a fresh and invigorating feel to some of the riffs that introduce the album. Most importantly, there’s some life behind them – giving rise to some nice headbanging moments (see “The Ripple Effect”), and are elevated by Eric Almeida’s growls. A different side of the band opens up with “Stars,” shooting off into more atmospheric, churning segments and enhanced electronics – leading up to some soaring clean vocals. Yet despite all this, there’s still an effective measure of power. “Spiral” also contains these qualities, but they are used in a way that augments the lumbering grooves without mellowing out the proceedings. Some additional moments of note include the heavy breakdowns of “Chronos Fear,” the blend of aggression and melody on closer “Solar Pulse,” and the frenetic riffing that finishes off “Infinite Influence.”

Auras has made some promising moves in direction with Heliospectrum. They are well on their way to establishing a sound that steers clear of the majority of the modern progressive spectrum with a slant towards heavier riffing while integrating melodic elements. If they continue to expand their sound with their next release, it’s safe to assume that it will be a true monster. As for now, enjoy Heliospectrum for what it is – groove-laden progressive metal that doesn’t leave behind its bite.