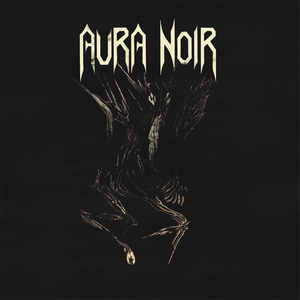 A band that has definitely been around the block a time or two, Norway’s Aura Noir are also one that have stayed true to their cause. Ugly, fuzzy, and gritty black/thrash made just the way that you like it. The band’s sixth offering (and also their first album in six years), Aura Noire, may offer little in the surprise category, but it doesn’t mean that it can’t scratch a certain itch.

The usual sources for this particular brand of abrasive tunes apply (a la Venom, Bathory, Hellhammer) and Aura Noir keep the black/thrash line completely straddled as they crank out some noise. There’s the more crazed and energetic cuts like “The Obscuration” and “Shades Ablaze” that seem to revel in a combination of raw speed, punchy riffs, and hellish shouted vocals. But where the album seems to shine it’s filthiest is on the slower, and more riff-oriented cuts such as “Mordant Wind” or “Grave Dweller.” Both serve a more ‘rocking’ cause it feels, yet they keep plenty of darkness and grit behind them that no one is going to question their legitimacy. Control is the word that seems to come to mind best on a number of these tracks – while the band can certainly still bring the more blackened/thrashy tempos (and said fury), the grimy melodies when they slow things down ooze just as much darkness albeit in a different variety. Also worthy of note is despite the dirtiness present, it’s quite a slick production. Every instrument has its place in the mix, proving that just because something sounds filthy doesn’t mean it has to sound like garbage.

While it’s more or less what you’ve come to expect from Aura Noir, they do it quite well. Some deceleration at times helps to keep some focus and memorability within the sound (particularly the riff strength), and lets them really let it rip when the time comes.