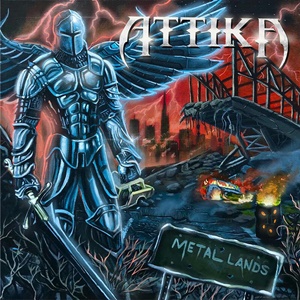 A part of the cult US metal movement, releasing two albums between 1988-1991 before breaking up a few years later, Florida heavy metal act Attika have sustained healthy underground appeal in those ‘true’ overseas markets. Enough so they’ve played festivals in Greece and Germany with Up the Hammers and Headbangers Open Air in 2018/19 respectively – setting the stage for a reunion record in Metal Lands. Vocalist Robert Van War and drummer Jeff Patelski remain from that early period, rounding out the lineup with guitarist Bill Krajewski and bassist Glenn Anthony. After 30 years though, has Attika struck gold again creatively – or should they have rested on their past accomplishments?

Immediately impressive out of the gate is the powerful production and heavy tones achieved – no one will accuse Attika of skimping out for a crunchy guitar sound, allowing the bass even playing field opportunities, and a drum kit outlook that has plenty of energy, snap, and force. Playing on a US power/heavy platform that leans towards a tier of bands like Omen, Lizzy Borden, and Savatage, the main struggle with getting fully into these tracks is the quality of main hooks, riffs, and repetitive, basic chorus work that takes on uninspired, less than enthusiastic execution. The anthem-oriented riffs and lower register melodies from Van War during “8 Track Days” sounds like recycled Accept/Metallica riffs that would never make the grade for either artist, while the semi-gallop/marching strains within “Run with the Horseman” aren’t going to cut the mustard for Priest/Maiden mavens. Robert has the pipes for sure – the struggle becomes his exact placement of certain higher notes, using a bit more of his James Rivera-ish personality in spots where he should just remain straightforward in his power and projection. When the band chooses to get a little more progressive for “Like a Bullet”, the rhythm section action propels the arrangement to become a dynamic highlight. By the conclusion of the record with the power ballad “One Wish”, there’s the sense that Attika needs to get their songwriting chops a little more underneath them if they wish to create a stronger fourth record down the line.

Diehards in Germany, Greece, and other countries that love US-metal from the 80’s may find parts of Metal Lands delightful, but in the long run Attika have a ways to go if they want to capture more interest from the newer followers of traditional/power metal.