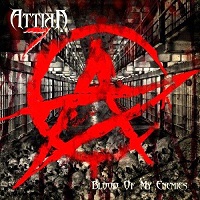 No rapping or hardcore out of Seinfeld and crew here. Instead, Attika 7 play a rather meat and potatoes brand of metal than hooks up with the 90’s metal sound that Pantera, Machine Head, and Sepultura were working. Per the lack of rapping, Seinfeld proves himself to be an able vocalist, using the gravely pitch of his voice to tell various stories of prison life and revenge. Upon learning that Cooney did some time in the slammer before recording Blood of My Enemies, it starts to make sense. Plus, Seinfeld was a regular on HBO prison drama Oz. Not like that’s like real prison or anything, but you get the idea.

The songs here are mostly easy to latch onto, although some may gripe with the overly-simplistic nature of jams such as “All or Nothing,” and most notably, “Devil’s Daughter,” which is a “Walk”/”Beautiful People” hybrid. The band does occasionally dip their feet into melodic waters, which is probably why “Serial Killer” and “Dying Slowly” have the most effect. Big minus points for the spoken word “The Cold Hard Truth,” which is misplaced in the middle of the album and has some questionable barbs about vengeance and the “truth.”

So-called “supergroups” in this day and age have had a difficult time causing any sort of ripples, so it’s going to be an arduous climb for Attika 7. However, there’s quite a bit of crossover potential considering Seinfeld and Cooney’s rather public personas. Don’t be surprised if you hear some of these songs popping up on an episode of Sons of Anarchy.