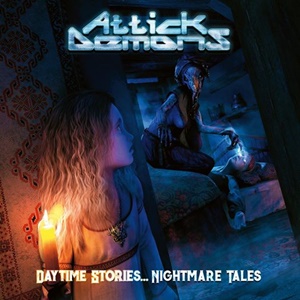 Portugal act Attick Demons came to this scribe’s attention through their second record Let’s Raise Hell from 2016 on Pure Steel Records, notable for its Iron Maiden and Wolf-like qualities. In the subsequent years they’ve been able to play some prestigious festivals in Spain, Sweden, Germany and Slovenia, sharing the stage with U.D.O., Sabaton, Hammerfall, Overkill, and Arch Enemy among others. Now receiving a new record deal with Rock of Angels Records, Daytime Stories, Nightmare Tales as the third studio album showcases a band willing to experiment a little in terms of tones and aggression, while not forsaking those early traditional/NWOBHM roots that put them on the map initially.

Focusing on Portuguese history and the occult for many of the lyrical themes this go around, the incorporation of keyboards and seven-string guitar use plus production values that beef up the guitar and bass tones definitely gives the material a modern, punchy sheen compared to their previous outings. Cultural chord progressions evoke numerous singalong moments, most evident in “Renegade” while the follow-up “The Revenge of the Sailor King” pushes Attick Demons into traditional metal anthem glory, full of prime-time guitar hero moments that set up the premiere Bruce Dickinson-esque pipes and melodies of vocalist Artur Almeida. The ballad-esque opening sequence for “Hills of Sadness” features piano strains against the bass hook, as guitarists Nuno Martins and Dario Antunes set the table through introspective clean/power chord choices and another thoughtful lead break perspective, heightening the emotional capacity of this track. Another back half highlight is “O Condestável” – a song paying tribute to Nuno Alvares Pereira who aided Portugal’s independence, the song featuring dynamic cultural significance in the marching musical strains and native tongue lyrics. Recording at UltraSound Studios with producer Hugo Andrade, the material has a bit of that bite that put the mid/late 90’s Bruce Dickinson solo records on notice.

Third records are very important in the discography for most metal bands – shedding early influences to establish their own niche to hopefully vault them into permanency for their following. Attick Demons have done well to balance the tools of modern technology and instrumentation to their advantage, while keeping their eyes on the traditional heavy/power metal style they’ve been known for in this record.