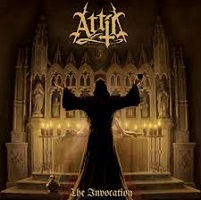 The falsetto. When played for unsuspecting listeners (i.e. those not well-versed in metal), it usually elicits laughter, for it evokes all sorts of ball-pinching/groin jokes. Yeah, real funny. The style has managed to hang on through the vintage King Diamond/Rob Halford years, and now exists thanks to the recent work of Stu Block (Iced Earth/Into Eternity), Tim “Ripper” Owens (ex-Judas Priest, Iced Earth), and Portrait’s Per Karlsson. Next man up: Attic’s Meister Cagliostro.

Hailing from Germany, Attic was formed in late 2010, with a self-titled EP to show for themselves prior to the recording of their debut full-length, The Invocation. By all accounts, it appears the band is trying to split the difference between In Solitude and the aforementioned Portrait, meaning, this is yet another lunge at the magnificent and (un)holy sound of Mercyful Fate circa 1984. Cagliostro naturally, is the showboat here, pimping a very King Diamond-like vocal approach, nailing his cloud-scraping falsetto, while employing a myriad of styles that only serve to supplement “The Falsetto.” (Surprised none of these vocalists have tried to trademark something like that, although Halford likes refer to his vocals as “The Voice.” Such narcissism).

Not surprisingly, a plethora of song titles appear to be swiped out of KD’s old notebooks, like “Funeral in the Woods,” “Join the Coven,” and “The Headless Horsemen.” It’s almost like you can picture the next Mercyful Fate album (whenever the hell that will be…probably never at this point) having these song titles. Prophets Attic are not, but they are some good takeaways from The Invocation, like the vamping on “Funeral in the Woods” or the brooding “Edlyn,” which is possibly the band’s “Melissa.” The parallels to MF are endless, aren’t they?

The real capper would be if Cagliostro employed an exploding skull onstage. That would be a total “C’mon man!” moment.