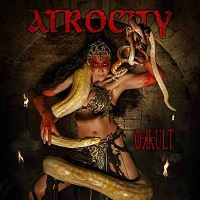 This scribe will never forget Atrocity main dude/Leaves’ Eyes sideman Alexandar Krull asking a capacity Cleveland crowd, “How are you doing tonight, Chicago?” Talk about an unintentional, but ironic Spinal Tap moment, eh? This may suggest how Krull’s career has become more identifiable with Leaves’ Eyes (where upon said question was asked…opening for Blind Guardian no less) as opposed to with Atrocity, the band he guided through the early death metal years. Atrocity has almost become an afterthought in light of Krull’s marriage to Leaves’s Eyes frontwoman Liv Kristine, not to mention those goofy 80’s pop rock cover albums. But hey, the man has some majorly flowing locks and Kristine on his arm, so maybe he wins.

On Okkult (their 12th album), Atrocity does their best to mesh with their formative death metal underpinnings, something that comes to the fore on opener “Pandaemonium.” Bereft of the industrial swirl that has come to define their recent works, “Pandaemonium” is the type of no-frills, hard hitter that would fly in any era of death metal. This comes with a catch, though, as “Death by Metal” (Dethklok Metalapocalypse anyone?) and “Haunted by Demons” find themselves jousting with Euro-happy industrial Goth metal (that’s a long description), essentially hunkering down with dinky simplistic riffs and compositions.

The cubbard isn’t totally bare, though, as the chanting on “Murder Blood Assassination” is worthy, as is the melodic flair on “When Empires Fall to Dust.” Beyond that, Okkult at least has some fire in its belly, mostly without the too-cute dance-Goth the band became so fond of for most of their career. A back to basics album this is not, but with Okkult, Atrocity demonstrates they haven’t forgot where they came from.