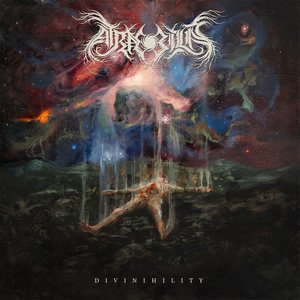 Digging the 2-word combination that reprises the title for Atrae Bilis’ latest work in Divinihility. Probably overthinking this by a long shot, but the combination of two things works well for the band in terms of their description – being knee deep in both dissonant death metal and the more brutal variety. Some other pieces come up as well though, making Divinihility one worth a look within the extreme circles.

On the one hand, you’ve got a lot of interesting dissonance and atmosphere going on, coupled with some technical stuff on that end too (Gorguts being a solid reference point here). “Upon the Shoulders of Havayoth” weaves an intricate web of riffing that’s both frenetic and dense, but there’s also a time and place for some more straight-ahead grooves and chugs (think Dyscarnate). It’s something that the closer “A Ceremony of Sectioning” also excels in. These more visceral and less tech-heavy moments give the listener not only some release, but a chance to breathe in as well and keeps them fresh. It’s a great combination that does feel innovative here, particularly on a track like “Phantom Veins Trumpet,” where some genuine brutal death metal chugs are employed and it adds an invigorating spice to it all. It does feel a bit short at only 22-minutes, but as the scribe that usually cries foul at longer efforts we’ll call it a good reason to go back through the whole thing an extra time. With so much going on in each of the tracks, it’s impressive how inviting the overall landscape is, particularly when it comes to just going back and listening to the whole thing again.

Atrae Bilis are an extreme act that feels full of promise and potential. The way that they incorporate different elements of brutal, dissonant, and even some melodic tendencies in their music is more innovative than most and it will ‘pop’ as you listen to it. Divinihility is short, but packed to the gills with excellent songwriting and visceral energy.