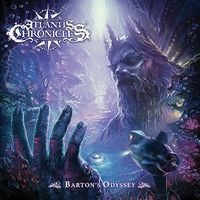 First getting to know Atlantis Chronicles through their debut, Ten Miles Underwater, the jaw-dropping cover art brought the initial hook (as will this album’s art). Three years later, Barton’s Odyssey seems primed to deliver Atlantis Chronicles to the next level. Though the tech element may be the selling point for some, to dismiss the album as nothing more than that diminishes some of the true strengths of Barton’s Odyssey.

Upon entering “The Odesseus,” you’ll be treated to plenty of guitar heroics. It’s clear that the tech death fans will be drawn into what Atlantis Chronicles it pitching, and they don’t hold back on the wow-factor with this first track. “I, Atlas” and “Within the Massive Stream” also use dizzying guitarwork to enhance the flavor of the tracks without taking away too much spotlight. Because equally important is the band’s sense of melody and atmosphere. Later tracks, like “Upwelling Part II” have impressive melodies that move from tech death and more towards melodeath territory, not to mention the feeling that goes into this segments. There’s a real sense of (underwater) adventure that you hear if you just sit back and soak in the album. The vocals also set the band apart, with throaty screams being the main weapon of choice, instead of the usual growled ones, which actually make for a more intense, and varied display (note a few moments of cleans and spoken word as well).

Interesting underwater lyrics (a continuation from Ten Miles Underwater no less), a good balance of technical display and melody, and plenty of atmosphere make Barton’s Odyssey a strong outing. Plenty for all walks of the modern death metal life to get behind, Atlantis Chronicles is bound to gain some ground with fans on this one.