At the Dawn – Land in Sight (Bakerteam Records) 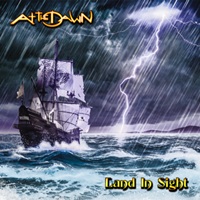 We might be running out of ideal symphonic-oriented power metal names, as Italian sextet At the Dawn pick one that may be better suited for a doom or gothic moniker than something that conjures up uplifting harmonies and pumping double bass. Alive since 2011, Land in Sight is the band’s second full-length album, given a boost in the professional sound department by DGM/Empyrios guitarist Simone Mularoni at Domination Studios. After a few playbacks though, you get the feeling that these musicians may not have been quite ready to rise up on the label plateau – as cracks in the performance and writing armor appear early and often, making these 12 tracks tough sailing for even novice power/ heavy metal ears.

Much of At the Dawn’s approach is of a mid-tempo to slightly dramatic symphonic nature, a template where the keyboards and guitars alternate for most significant air time to drive the hooks home. The types of riffs and choruses you hear in “Siren Call”, “The Deserter” (love the bell chimes during the instrumental bridge transition) or “Tiger Within” recall Freedom Call meets 90’s era Stratovarius – as drummer Mattia Ughi fluctuates between steady grooves and octopus-like fast fills that prove he isn’t a one trick pony behind the kit. Lead guitarist Michele Viaggi has tasteful flair in much of his note break selection – Gus G and John Petrucci would be proud of their influence during segments of “The Revenge” or the decidedly commercial anthem “A Crow with No Wings” where he chooses to be sparse in a playful manner with keyboardist Marco Iaffaldano.

And then it’s onto Land in Sight’s biggest detraction – vocalist Stefano de Marco. It’s a given that most power metal voices are going to be of a higher register, but when they can’t sound convincing due to English pronunciation struggles or have a weak, helium oriented nature to boot, it’s a recipe for doubled back laughter that positively was unintentional. One minute into the first verse of “Through a Darkened Sky” he tries to be Michael Kiske but is in league with Axxis’ Bernhard Weiss – and the shock of attempting the Bruce Dickinson penned Iron Maiden classic “Revelations” could put this in a hall of shame (‘our people dreeeeft and die’ tells you all you need to know).

Legendary Tales or Return to Heaven Denied this is not. The lightning storm needs to crash more creative ideas and better execution, or At the Dawn seem destined for little else beyond hometown glory.