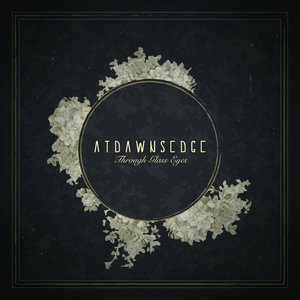 Randomly coming across At Dawn’s Edge while perusing for some video content for our Visual Rhetoric column, their video for “Evil Flamingo” offered a taste that was well worth looking further into. The Toronto-based act incorporates several different sources for inspiration to create a modern sound that may have some familiar components, but is rapidly branching out into their own beast, based on the strength of Through Glass Eyes.

At Dawn’s Edge brings together sounds like djent, groove, progressive, symphonic, and electronic all together to surprising success. Surprising in the fact that the group is relatively fresh onto the scene (they have only 1 EP that was released in 2015), and that they manage to cohesively bring the elements together without making the landscape seem too full. They even bring in more exotic sounds from time to time (see “Forgotten Isle”), further expanding their repertoire. The riffing takes some progressive tendencies, and offers plenty for the listener to chew on, with hypnotic grooves in “From the Ashes” and dark melodies of “Evil Flamingo” being highlights in that regard. The synth and electronic components offer enhancement to the formula rather than an outright takeover, and violin parts like those of “Utter” help to teleport the band into their own musical wavelength. Some modern bounce takes over with “Nightmare Reality,” while opener “If Ghosts Were Men” sets the state for what to come in terms of melodies and arrangements. Tamara Filipovic adds the final selling point with her vocals, being able to move into the operatic and soaring range if needed, though the strongest moment on the album comes with “Amorina,” where Filipovic shares parts with Chris McConnell in an enchanting duet that is brought up by exotic orchestration, violin, and strong riffing.

A thoroughly enjoyable debut that dabbles in many different sounds without overdoing it, Through Glass Eyes is one to investigate for those who enjoy melodic and progressive metal. Solid instrumentation and soaring vocal work lay a great foundation from which At Dawn’s Edge may further expand in the future.