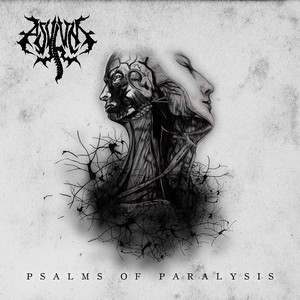 How tough it is to be an upcoming band nowadays amid the sea of competition. While there’s only so much that can be done within the confines of the metal realm, it doesn’t stop some from trying to expand boundaries or try different directions. Texas-based Asylum seem to be heading in the right direction on their debut, Psalms of Paralysis.

Of course, we can just call Psalms extreme metal and be done with it, but that’s not entirely helpful. For Asylum has taken different elements and fused them together into a way that may have a familiar vibe but at least offers a fresh take. Merging more technically-driven death metal with a black and thrashy combo, the album comes across as lively and ear-catching. The title track, for instance, uses a nice mix of blackish melodies and speed coupled with death metal grit and groove. The more progressive and technical side (think Arsis) gets into action with little intricate blasts in tracks like “Prefrontal Orbit” while keeping a more aggressive edge. These bits and pieces help keep Asylum from being lumped in with the tech death crew, and gives the music a more visceral and less sterile bite. Vocally, the growl/rasp hits the usual standards, though occasionally the rasps come across as a bit too much/over the top (see “Obsidian Spine”), almost detracting from the music, though admittedly it only happens a few times.

Those in the mood for some death metal that is intricate yet contains its lifeblood intact should find Asylum’s Psalms of Paralysis appealing. The black and thrash influences give the band more of an edge on the originality factor, and some potential for growth. Time will tell how they further shape their approach but it’s certainly the start of something that could lead to promising territory.