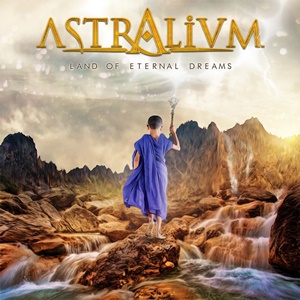 Originally known as Black Roses before changing names, Italian group Astralium started in 2014 and over the course of the first few years established their presence locally through shows and festival appearances. By the fall of 2017 with the lineup firmly in place, recording sessions began for Land of Eternal Dreams – finally appearing this year on Rockshots Records. A concept record surrounding dreams and the astral universe, there are twelve tracks in the main (plus a 13th ‘bonus’ cut) that takes a symphonic metal base and travels into power, progressive and cinematic/classical realms.

The quartet place proper emphasis on a heavier guitar tone from Emanuele Alessandro to assure followers that this is still metal, no matter how many choirs, keyboard parts, or orchestration elements you add to the mix. Check out his neoclassical licks and powerful riffing during “Whisper in the Silence” and the exotic nature that goes in tandem with the Middle Eastern thematic aspects of “The World of Unknown” to see the man’s far reaching tastefulness and sophistication at his craft. Dual female/male vocals come up with Roberta Pappalardo and Salvo Grasso (the latter also on drums) – Roberta gracing us with a charming clean voice that can also belt out some soprano operatic parts when called for, Salvo offering the male contrast for dynamic texture. Check out her smoothness against the Evergrey-ish stunted rhythms and swirling background choirs/keyboards for “The Journey” or the bombast propulsion within “Seven Seas, Seven Winds” for the duo’s charm and varied coloring the voices offer to the arrangements. The band can lob Dream Theater intricacies into the mix against a steady diet of Epica, Within Temptation, and Evanescence ambiance – but there’s also some Symphony X/Kamelot diversity that keeps Astralium away from being a straightforward symphonic metal band.

Special guests pop in as well, most notably Tommy Johansson (Sabaton) and a variety of Italian musicians – but they don’t necessarily take the focus away from the main performances of Astralium, just enhancing what’s already there. If there’s a minor criticism, it’s the obvious Nightwish-like keyboards and orchestration for “Rising Waves from the Ocean” – the main hook and melodies something straight out of the Once playbook. Land of Eternal Dreams appeases those who want some more power/ progressive might injected into those sweeping cinematic/orchestral passages, and as a result could produce a wider following beyond one sub-genre.