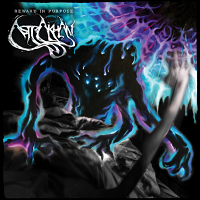 Ever the inquiring mind, DR decided to give “Astrakhan” the ‘ole Google look-up prior to writing this review. Apparently, it’s a city in Southern Russia. Nothing more to it. (Surely no one is going to be able to top Fallujah in the name-your-band-after-a-city department.) A Vancouver, BC outfit who has been active since 2012, Astrakhan are yet another member of the “kitchen sink club,” whereby not much is off limits, and proper description is appropriately elusive. On the band’s debut full-length foray, Reward in Purpose, Astrakhan proves that’s not as much of a conundrum as it is a selling point.

If anything comes to mind when working one’s way through Reward in Purpose’s running order, it’s the progressive sludge tag. And yeah, we’ve had our qualms with sludge over the years, yet Astrakhan’s present and formidable melodic basis is more than enough to overcome such issues. It’s on prominent display on album opener “Omajod,” which engages in back-and-forth with laid-back, almost doomy dynamics, and the pull of melodic, weighty riffs. And to the band’s credit, their penchant for hummable, potent clean vocal lines are an instant separator, as so found on “Turgid Waters” and album highlight, “The Traveler.”

Down the line, Astrakhan display versatility, whether on “Rabbits” (the album’s most restrained jam) or “Hand on the Stone,” which crashes around in Mastodon fashion. In any event, Reward in Purpose emerges as a mature, veritably progressive outing, which should be of comfort for a band with an odd name, but a digestible, wholly promising sound.